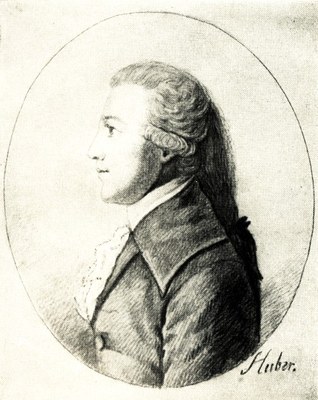 The writer and translator Ludwig Ferdinand Huber was born in Paris, the son of a German father and a French mother, and raised and educated bilingually in Germany. He translated from French and also eventually from English even as an adolescent. In 1788, he went to Mainz as secretary to the Saxon ambassador, working there with Georg Forster (1754–1794) and his wife on translations from French and English. He went to Switzerland in 1793 with Therese Forster, née Heyne (1764–1829), whom he married after Forster's death. There, he became a writer of political and literary texts and continued to work as a translator. In 1798, he returned to Germany as editor of the Allgemeine Zeitung.