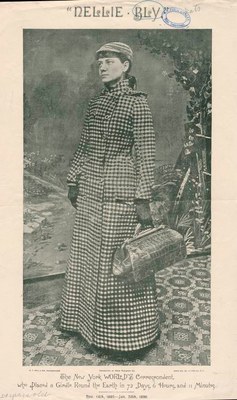 Nellie Bly (actually Elizabeth Jane Cochran, 1864–1922) worked as a journalist for Joseph Pulitzer's (1847–1911) New York World newspaper and travelled in this capacity from 1889 to 1890 in the footsteps of Jules Verne's (1828–1905) novel Le Tour du monde en quatre-vingts jours ("Around the World in 80 Days", 1873), becoming the first woman to travel alone through Europe to Hong Kong and Japan and, from there, back to the U.S. The roving-reporter type emerged in the Anglo-American journalism tradition, which makes a clear separation between the on-location reporter and the editor working in the office.