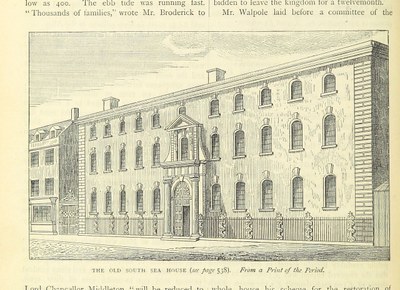 "In Threadneedle Street we stand in the centre of Roman London. [...] At the north-east extremity of Threadneedle Street is the once famous South Sea House. The back, formerly the Excise Office, afterwards the South Sea Company's office, thence called the Old South Sea House, was consumed by fire in 1826. The building in Threadneedle Street, in which the Company's affairs were formerly transacted, is a magnificent structure of brick and stone, about a quadrangle, supported by stone pillars of the Tuscan order, which form a fine piazza. The front looks into Threadneedle Street, the walls being well built and of great thickness. The several offices were admirably disposed; the great hall for sales, the dining-room, galleries, and chambers were equally beautiful and convenient. Under these were capacious arched vaults, to guard what was valuable from the chances of fire."