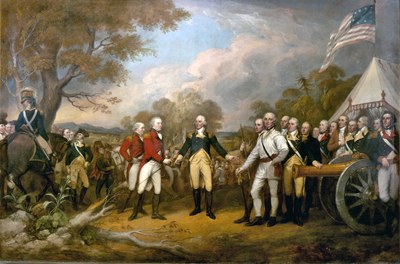 Although several years elapsed between the British capitulation at Saratoga in 1777 and the Peace of Paris (1783), this event is seen as decisive in that it moved the great power France to support the Americans. The American painter John Trumbull shows the consequences of the battle by depicting a fallen tree on the British side of the painting, while a starred banner flies above the group of Americans. The etiquette which all those involved closely observed is also emphasised: General John Burgoyne (1722–1792), whose nickname was "Gentleman Johnny", offers his sword with perfect composure, and his enemies refrain from offering any slights.