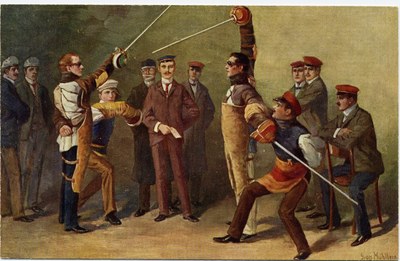 The term "Burschenschaft" ("fraternity") initially referred to the entire student body of a university. With the foundation of the "Jenaer Urburschenschaft" on 12 June 1815, it started to be applied to those organized students, who (heavily influenced by the ideas of "Turnvater" Friedrich Ludwig Jahn, 1778–1852) campaigned for the national unification of Germany and political reforms. As varied as the fraternities subsequently were in their structures and aims, they had all the characteristics of a men's association in common. This oil painting by Georg Mühlberg (1863–1925) depicts the so-called "Mensur" (duel), an initiation ritual among members, in which two "Paukanten" (duellers) fought each other. The duelling ritual, which was not a feature of all fraternities, which varied in its form, and which was at times banned by the authorities, symbolizes the successful transition to manhood in a fraternity.

Georg Mühlberg (1863–1925), "At the Duel", picture postcard, Germany, around 1900, image source: with the generous permission of the archive and library of the Deutsche Burschenschaft, Koblenz, http://www.burschenschaftsgeschichte.de/bilder/georg_muehlberg_serie/.