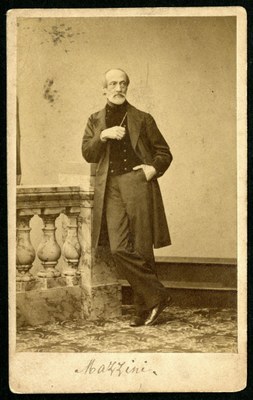 This portrait shows Giuseppe Mazzini (1805–1872), a major exponent of the Italian Risorgimento and organiser of secret societies. The photograph, which was once in the possession of Eugène Steens (1815–1898), a Belgian freethinker and socialist, was taken in London, where Mazzini intermittently spent many years in exile from the 1830s on. The photographer, Leonida Caldesi (1823–1891), was an Italian political refugee and Freemason who had become a society photographer in London; his partnership with Ernest Blanford operated in 1860–1862.