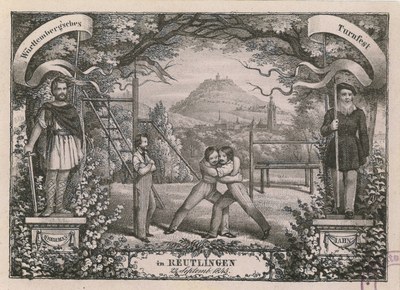 During the Age of Metternich, also known as Vormärz or pre-March era, the gymnastic unions (Turnvereine), whose members held mostly liberal political views, were under the surveillance of the authorities. This card was published as part of the gymnastic tournament of the state of Württemberg in Reutlingen in 1845. It shows not only two wrestlers but also the statues of Friedrich-Ludwig "Turnvater Jahn" (1778–1852) (right), the founder of the gymnastic movement, and of "Hermann the Cheruscan" (left). The latter is modelled on Arminius (ca. 18 BC–21), the chieftain of the Germanic Cherusci, who defeated three legions of the Roman army in the Battle of the Teutoburg Forest. Stylised as the saviour of the Germanic people, "Hermann the Cheruscan" became a particularly popular figure in German nationalism, beginning with the Napoleonic wars in the 19th century.