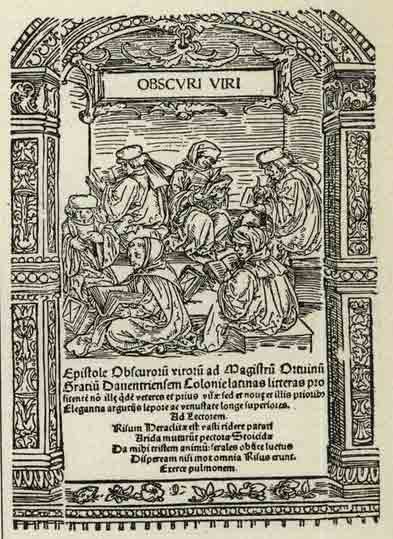 The so-called Letters of Obscure Men (Epistolae obscurorum virorum) were a collection of fake Latin letters, which satirised the lamentable conditions, dominated by scholasticism, among the clergy and in the universities. Allegedly written by Dominican monks, the real authors were probably German humanists, possibly including Johannes Reuchlin, Ulrich von Hutten and Erasmus of Rotterdam. The Epistolae obscurorum virorum originated in the context of the public argument between Reuchlin and the Cologne Dominicans, above all the Jewish convert Johann Pfefferkorn, on the question of whether one should burn Jewish books. Reuchlin, who condemned the burning and who had the support of Germany's most prominent humanists, had published their letters of support in 1514 under the title Epistolae clarorum virorum. Although the Letters of Obscure Men supposedly opposed Reuchlin's position, their satirical form actually discredited the opinions of the Dominicans.