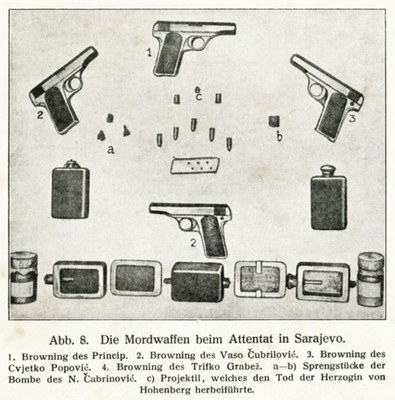 At the top, we can see the Browning used by Gavrilo Princip (1894–1918) to assassinate the Austrian Archduke Franz Ferdinand (1863–1914) in Sarajevo on June 28, 1914. Princip was a member of the secret society Smrt ili Život ("Death or Life"), often confused with the Serbian association known as Crna ruka (the "Black Hand"). After his trial, the gun was given to Anton Puntigam (1859–1926), a prominent Jesuit from Sarajevo, who argued that French Freemasonry was behind the killing. In 2004, the Societas Jesu offered the gun to the Heeresgeschichtliches Museum (Military History Museum) in Vienna.