The Siege of Münster 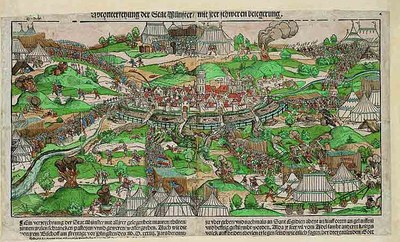 In the 1530s, Münster was a stronghold of Anabaptism. Under the leadership of the Dutchman Jan Mathys, this radical, fundamentalist movement, which rejected the baptism of children in favour of that of adults and had therefore, amongst other reasons, split from the Protestant confession, seized power in the city, soon descending into a reign of terror and famine. Because the so-called Münster Rebellion organised by Mathys and his followers also threatened the temporal power of Münster's Prince-Bishop Franz von Waldeck the latter took military action against the city. The siege lasted from 1534 until 1535 and ended with the success of the episcopal forces, which had been supported by imperial and Protestant units. They massacred the Anabaptists and restored the old order.