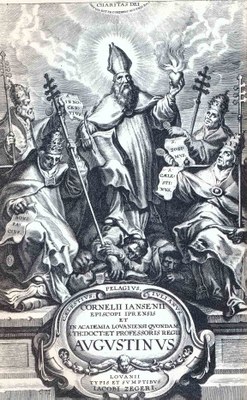 Jansenism was a current of Gallicanist Catholicism whose originator was the Dutch bishop Cornelius Jansen. In his treatise Augustinus (1640), which was only published after his death, he tried to refute the Jesuit interpretation of the Bible, which he saw as semi-Pelagian. To achieve this, he turned to the original writings of St. Augustine and his thoughts about the original sin of mankind and men's salvation by God's grace alone. At the same time, Jansen sought to return to an authentic Catholicism. Due to the close connections to attempts at national emancipation, Jansenism became, after Jansen's death, a synonym for anti-Roman trends in favour of national churches.