School of the Alliance Israélite Universelle in Edirne 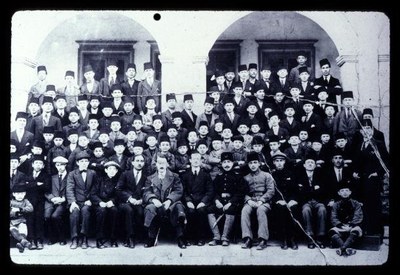 The Alliance Israélite Universelle (AIU) was founded in Paris in 1860 following a series of ritual murder accusations against Jews, most significantly the Damascus Affair of 1840, and it is considered one of the most important international Jewish organisations. It was intended to strengthen the bonds between Jews and Jewries, to coordinate acts of solidarity, and to provide informal diplomatic representation for the Jews. The organization also supported the expansion of western education among Jews in Eastern Europe, North Africa and the Middle East. The AIU remains in existence and still has its headquarters in Paris. The picture shows teachers and students of the AIU school in Hadrianopolis/Adrianople (Edirne) in Turkey at the beginning of the 20th century.