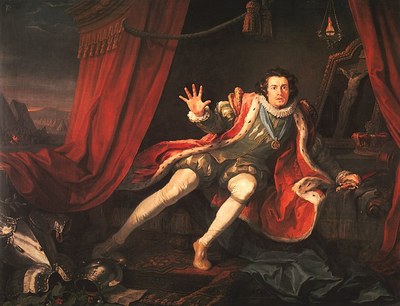 This painting by William Hogarth (1697–1764) presents the famous actor David Garrick (1717–1779) in the role of King Richard III from William Shakespeare's (1564–1616) eponymous play. Garrick is shown here in the scene before the Battle of Bosworth when King Richard III is haunted by the ghosts of all those he had murdered. The position of Garrick's body resembles the stretched shape of an "S" which Hogarth considered particularly beautiful. This "serpentine" line also forms the basis for Hogarth's influential theoretical work "The Analysis of Beauty" (1753).