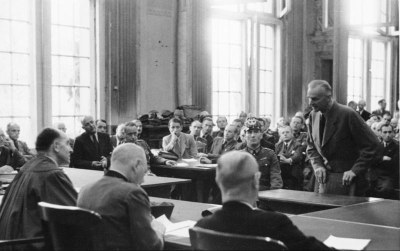 Carl Goerdeler was mayor of Leipzig from 1930, as well as Reich's Commissioner for Price Control 1931–1932 and 1934–1935. The nationally oriented conservative was a proponent of economic liberalism and emphasised the role of government elites and social elites. After an initial period of cooperation with the National Socialist state Goerdeler's opposition grew. Consequently, in 1937 he resigned his post as mayor of Leipzig. In 1938, he established close ties with the national conservative opposition to Hitler and in time became its centre. Following the attempt to assassinate Hitler (1889–1945) on 20 July 1944 Goerdeler was arrested while attempting to flee. The photograph shows him (standing at the right) as one of the accused before the Volksgerichtshof (People's Court), which on 8 September 1944 sentenced him to death.