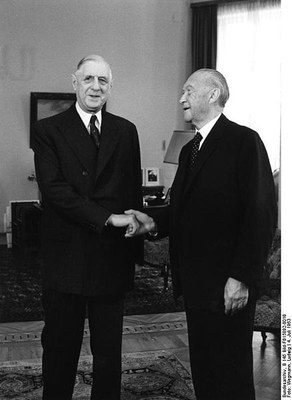 During the Second World War General Charles de Gaulle rose to become the leading personality of the French in exile. In 1945, the National Assembly elected him to the posts of Minister President and provisional President of State. Following the rejection of his call in 1946 to endow the office of the president with strong authority, de Gaulle resigned both posts. When the Fourth Republic collapsed in 1958 the National Assembly again elected him Minister President and President of State, this time providing him with comprehensive powers. His foreign policy was guided by the intention of maintaining complete independence for France ("force de frappe", withdrawal from NATO). His policy for Europe opposed the loss of the sovereign rights of the nations and called instead for a "Europe of Nations". The photograph shows Charles de Gaulle and, at his right, German Chancellor Konrad Adenauer (1876–1967), with whom he signed the Franco-German Treaty of Friendship in 1963.