Philip II of Spain as Defender of the Faith 1619 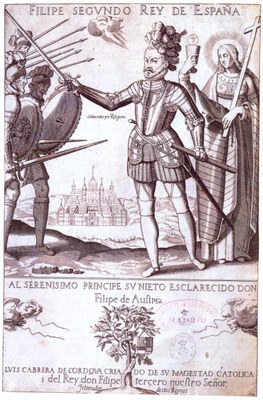 Cabrera de Córdoba dedicated his chronicle of 1619 to the Infante Philip (1605–1665), later to become Philip IV of Spain. In the centre Philip is depicted wearing his armour, in his left hand he holds his marshal's baton, with the right he raises his sword against the enemies of the true faith, which is personified by the allegorical figure at the right. In the background the Escorial. The picture can be interpreted as an appeal to the future monarch to follow his gandfather's example in defending Catholizism with any means and against all it's enemies.