The Palace of Caserta 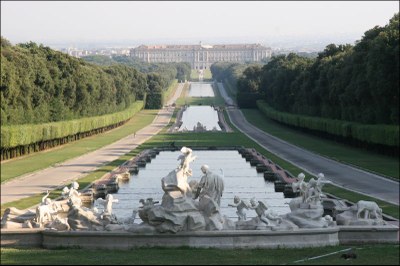 Prior to becoming Charles III of Spain, the king of the Two Sicilies had Luigi Vanvitelli build the Palace of Caserta from 1752. It was planned as the new administrative centre and a symbol of power after the example of Versailles. As in Versailles, large quantities of water had to be directed to the site. The canals and the cascades are aligned along the central axis of the palace and, at 3 kilometres in length, offer a majestic view.