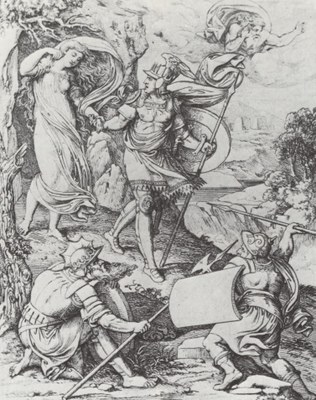 'Fingal rushed, in all his arms, wide bounding over Turthor's stream, that sent its sullen roar, by night, through Gormal's misty vale. A moonbeam glittered on a rock; in the midst stood a stately form; a form with floating locks, like Lochlin's white-bosomed maids. Unequal are her steps, and short. She throws a broken song on wind. At times she tosses her white arms: for grief is dwelling in her soul.

"Torcal-torno, of aged locks," she said, "where now are thy steps, by Lulan? Thou hast failed at thine own dark streams, father of Conban-cargla! But I behold thee, chief of Lulan, sporting by Loda's hall, when the dark-skirted night is rolled along the sky. Thou sometimes hidest the moon with thy shield. I have seen her dim, in heaven. Thou kindlest thy hair into meteors, and sailest along the night. Why am I forgot, in my cave, king of shaggy boars? Look from the hall of Loda, on thy lonely daughter."'