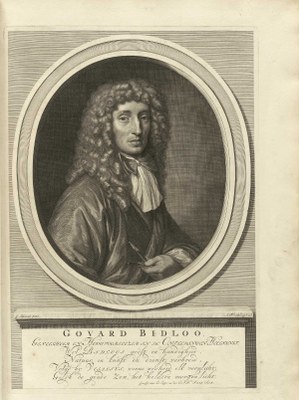 Govert Bidloo was a famous physician of the Dutch Golden Age. After studying surgery and medicine he was appointed lecturer in anatomical dissections in The Hague. In 1685 he published his Anatomia humani corporis, a "realistic" anatomical atlas which was meant to replace all contemporary anatomical atlases to date. In 1694 he became professor of anatomy and medicine at the University of Leiden, but often neglected his duties at the university: as physician to the Stadtholder William III, who was also a personal friend, he was much in demand, several times accompanying William III to his new realm in England. Bidloo's anatomical teaching was further jeopardised by a severe lack of corpses and the excellent anatomical teaching, which had given Leiden University such a good name, suffered as a result. Nevertheless, Bidloo retained his position until his death in 1713, when he was succeeded by Herman Boerhaave.