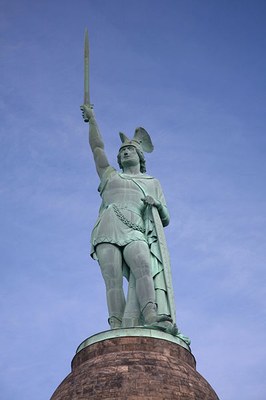 The Cheruscan prince Arminius (Hermann), who led a Germanic army into the Battle of the Teutoburg Forest in the year 9 AD and inflicted a crushing defeat on the Romans, is called the "liberator of Germania" in Tacitus' Germania. After a new edition of Germania was published in the 15th century, "Hermann the Cherusker" became of the most important heroes for proponents of the new German national pride. In Ulrich von Hutten's Arminius, written around 1517, but first published posthumously in 1528, Hermann is celebrated in dialogue form as a freedom fighter and the epitome of German invincibility. In the 19th century, Hermann worship played an important role in the German national consciousness. The huge Hermann monument near Detmold was inaugurated in 1875, including the base, it is almost 54 meters high.