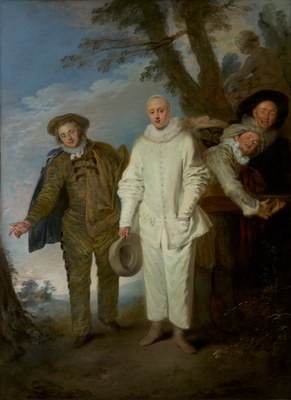 This painting by Jean-Antoine Watteau shows five actors of a commedia dell'arte troupe. Having just finished their performance in a park, they look expectantly at their audience. The clown in a baggy white suit, Pierrot, is holding his hat in his hand to collect coins from the spectators. Four other stock characters from the Italian commedia dell'arte flank Pierrot in the middle: (from left to right) Brighella (in a greenish-gold suit and shoulder cape), Mezzetin (with a guitar), Harlequin (in a black mask), Scaramouche (in a costume of black velvet with a white ruff).