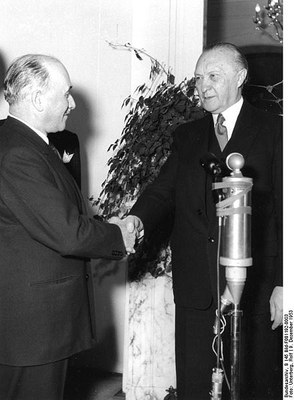 The French politician Jean Monnet was Deputy General Secretary of the League of Nations from 1919 to 1923. During the Second World War, he worked on various English-French and American armament and economic programmes. After the war, as head of the Planning Office (1946–1950), he developed modernisation programmes for the French economy and overseas territories. The photograph shows Monnet as president of the High Authority of the European Coal and Steel Community (1952–1955) during his first official visit to German Chancellor Konrad Adenauer (1876–1967). In 1955, he founded the "Action Committee for the United States of Europe" (which existed until 1975). In 1953, Monnet was awarded the Charlemagne Prize of the city of Aachen; in 1976, he was named the first "Honorary Citizen of Europe".