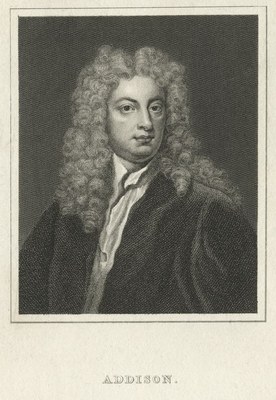 Joseph Addison (1672–1719) gained fame as an essayist and poet and supported the Whig party. Together with Richard Steel he wrote the moral weeklies The Tatler (1709–1711) und The Spectator (1711–1714); his journalistic, literary style was decisive for the development of the genre. Following the fashion of the time, in 1699 he went on the "Grand Tour", which brought him from England to France, Italy, Austria, Germany and the Netherlands. His tragedy Cato (1713) achieved wide success not only in England but also on the continent; it was translated into German by Johann Christoph Gottsched (1700–1766).