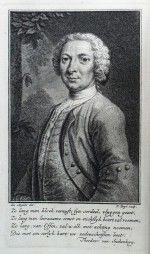 Justus van Effen (1684–1735) was born in Utrecht and played an important role in the reception of English literature in Holland. He translated Daniel Defoe's novel Robinson Crusoe as well as texts by Jonathan Swift, and he was a resourceful imitator and adapter of the Spectator and the Tatler. In 1711/1712 he published the moral weekly Le Misanthrope in The Hague. In 1713 he founded the literary journal Journal Littéraire and also translated Richard Steele's The Guardian into French. He went on to publish other weeklies, including La Bagatelle in 1718/1719, the Nouveau Spectateur Français in 1725 and De Hollandsche Spectator from 1731 to 1735. Later he worked as secretary to the Dutch ambassador in London.