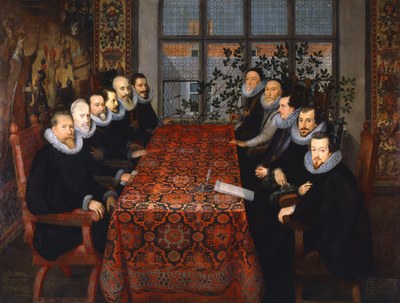 The painting records the Anglo-Spanish peace negotiations of 1604 at Somerset House (London) and, at the same time, provides involuntary evidence for the Europe-wide spreading of Spanish fashion: The English delegation, on the right, is almost indistinguishable in appearance from the Spanish, on the left. All depicted individuals are wearing the typical ruffs; but while the Spanish delegation is completely clad in black, which prevailed at the Madrid court, some of the English negotiators are also wearing colourful items of clothing.