Language and date of publication of works quoted by Braudel in Due secoli, tre Italie and Modèle italien 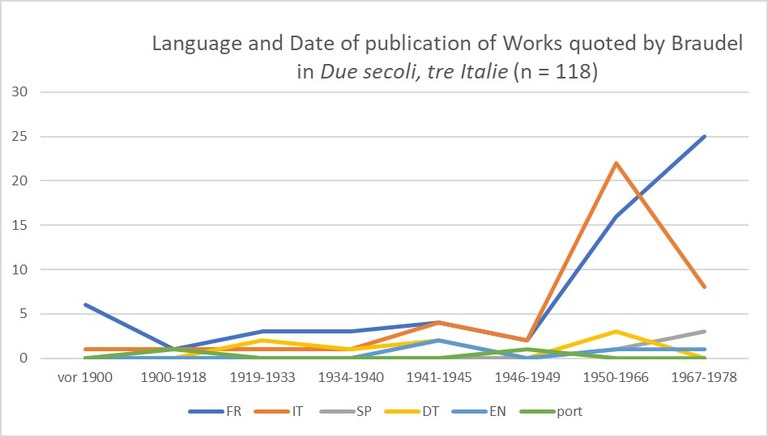 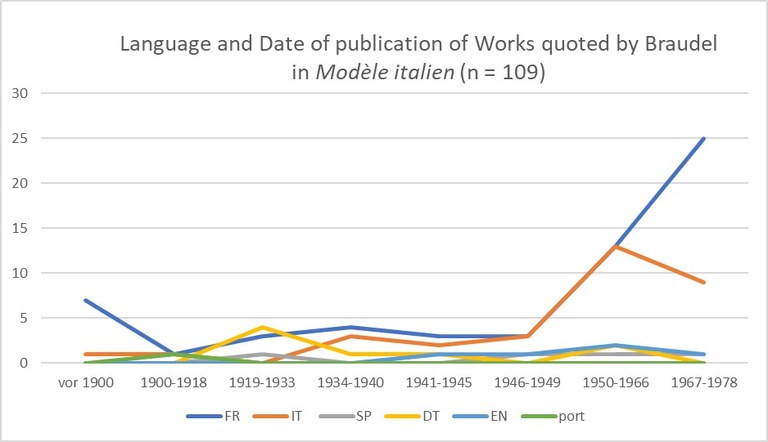 The bibliometric characteristics of the Braudel's Italian and French versions of the Modèle italien: The essay remains rooted in Braudel's pre-war reading, only a large number of full monograph books on Galileo Galilei – who was somehow the center of gravity for the question that we would call today the "scientific revolution" in its pre-British clothing – and on the problem of "Baroque" were introduced anew. For those questions, he had relied in the Mediterranean just on "Jacob Burckhardt...[and] les historiens allemands H. Wölfflin, A. Riegl, A. E. Brinckmann, W. Weisbach" (Med II, 569). Those are replaced now by the works of Franco Simone, Pierre Charpentrat, Yves Bonnefoy, G. Bazin, B. L. Tapié, Andreina Griseri (all published between 1957 and 1968, with the exception of the 1935 book by Eugenio d'Ors), next to several works on Baroque Music and Commedia dell'arte.

Language and date of publication of works quoted by Braudel in Due secoli, tre Italie and Modèle italien, charts, 2018, creator: Cornel Zwierlein.