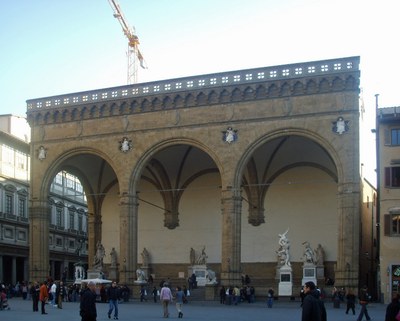 The Loggia dei Lanzi is situated on a corner of the Piazza della Signoria in Florence, Italy. It is right next to the Uffizi Gallery and houses an open-air gallery of antique sculptures and Renaissance art. Built between 1376 and 1382 to house the assemblies of the people and hold public ceremonies in Florence, the building was later named after the Landsknechte (German mercenary pikemen; it. lanzichenecchi, short: lanzi) of Cosimo de Medici (1519–1574) who were accommodated there in the 16th century.