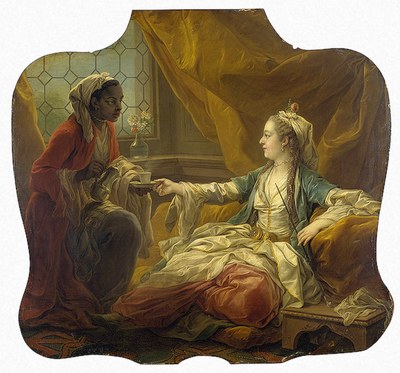 During the first half of the 18th century, the European nobility (and later also the wealthy bourgeoisie) developed a taste for the exotic and Oriental. Oriental clothing, or what was considered as such, was worn and objects originating from the Ottoman Empire were put on display. The picture shows Madame Pompadour (Jeanne Antoinette Poisson, Marquise de Pompadour, 1721–1764, mistress of Louis XV) as "Sultana" in (partially) Ottoman costume on a divan; the black servant is passing her coffee – the Turkish drink par excellence.