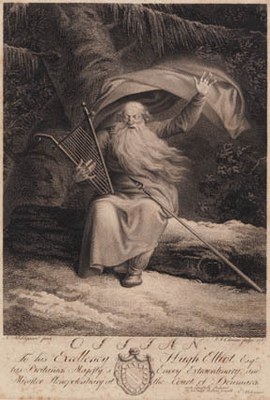 The Danish artist Nicolai Abraham Abildgaard, like many of his contemporaries, merged influences of Neo-classicism and Romanticism in his work. He was very fond of both classical and Nordic literary motifs. Ossian played a major part in his work, and his Ossian Singing his Swan Song has almost become the defining image of the blind bard. It is shown here in a contemporary engraving.

The last section of Ossian, entitled Berrathon, presages Ossian's death and tells of what will be his last song:

"Such were my deeds, son of Alpin, when the arm of my youth was strong. Such the actions of Toscar, the car-borne son of Conloch. But Toscar is on his flying cloud. I am alone at Lutha. My voice is like the last sound of the wind, when it forsakes the woods. But Ossian shall not be long alone. He sees the mist that shall receive his ghost. He beholds the mist that shall form his robe, when he appears on his hills. The Sons of feeble men shall behold me, and admire the stature of the chiefs of old. They shall creep to their caves. They shall look to the sky with fear: for my steps shall be in the clouds. Darkness shall roll on my side.

Lead, son of Alpin, lead the aged to his woods. The winds begin to rise. The dark wave of the lake resounds. Bends there not a tree from Mora with its branches bare? It bends, son of Alpin, in the rustling blast. My harp hangs on a blasted branch. The sound of its strings is mournful. Does the wind touch thee, O harp, or is it some passing ghost? It is the hand of Malvina! Bring me the harp, son of Alpin. Another song shall rise. My soul shall depart in the sound. My fathers shall hear it in their airy hail. Their dim faces shall hang, with joy, from their clouds; and their hands receive their son. The aged oak bends over the stream. It sighs with all its moss. The withered fern whistles near, and mixes, as it waves, with Ossian's hair.

'Strike the harp, and raise the song: be near, with all your wings, ye winds. Bear the mournful sound away to Fingal's airy hail. Bear it to Fingal's hall, that he may hear the voice of his son: the voice of him that praised the mighty!'"