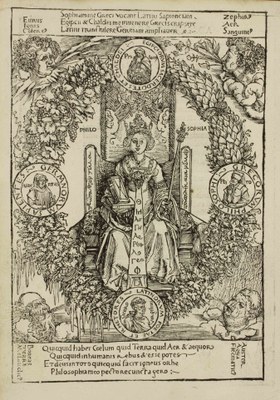 The Philosophia condenses to the maximum the ideologically charged variety of knowledge transfer which gained importance under the term of translatio studii. Among many other things, Dürer's sketch concisely describes in four medallions the historical path of the transmission of philosophical subject matter: from the ancient Egyptians, via Greeks and Romans to the Germans, who are represented by the famous polymath Albertus Magnus. Because of his knowledge of alchemy, he was considered to be the inventor of gunpowder. Next to the invention of movable type printing by Johannes Gutenberg, this discovery was viewed to be a revolutionary German contribution to the history of Western culture. This reflects not only political, but also technological linkages to the achievements of antiquity. The artist made the Philosophia for Konrad Celtis, who used it as an illustration in his Quatuor libri amorum (Vier Bücher Liebeselegien, Love Elegies in Four Books). The image is one of the few examples in which the direct influence of a humanist on an elaborate illustrative invention can be verified by the sources.