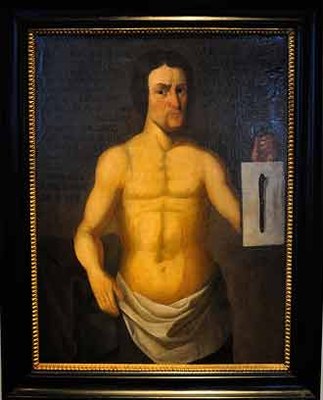 The anatomy professors of Leiden collected many rare and curious (medical) objects for the decoration of the anatomy theatre and for the edification of visitors and students. This picture from Otto Heurnius' collection shows Andreas Grunheide, a Prussian peasant who had swallowed a knife during a drinking bout in 1635. The knife was 10 inches long and was removed at the University of Königsberg. To commemorate the successful operation – an apparently well recovered Grunheide proudly presents the knife – the professor in charge had this painting made for his Leiden colleague Otto Heurnius, and it immediately gained a place among the other rarities in the Leiden anatomy theatre.