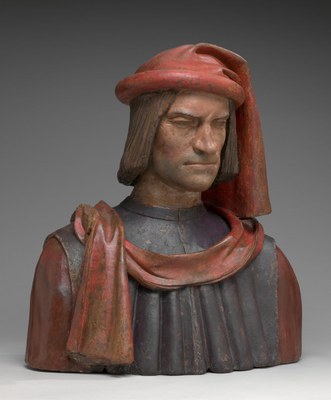 If we except the death mask, no contemporary portrait of Lorenzo survives. This terracotta bust, a copy from a model by Andrea del Verrocchio and Orsino Benintendi, comes probably closest to his lifetimes, however, some elements betray decisive elements to characterize Lorenzo as a great statesman, 'caring' for the respublica, emulating the frontal furrow as to be found on classical portraits of Octavianus Augustus.