Promulgation of the German Civil Code, 1896 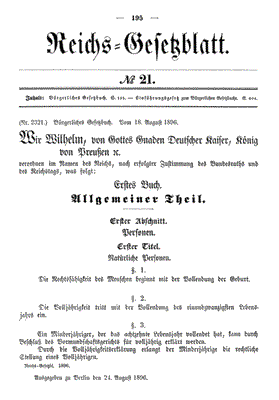 The new civil code (Bürgerliches Gesetzbuch, BGB) for the German Empire was announced in the Reichsgesetzblatt (public gazette) in August 1896 and came into force on 1 January 1900. In its outward form, the BGB was a "law code for lawyers", i.e. one that was distinguished by its systematic structure and a level of abstraction and precision in its terminology that made no concessions to popular intelligibility. It is considered the epitome of pandecticism, the academic German adaptation of Roman legal principles. The BGB was influential in the German-speaking world and beyond as an example of a rigorous codification of civil law.