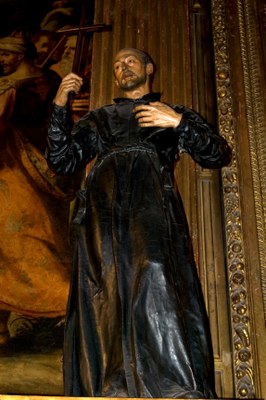 This life-size image of St. Ignatius was carved by Juan Martínez Montañés on the occasion of the canonisation (1609) of Ignatius, the founder of the Jesuits, and painted by Francisco Pacheco. The statue represents a typical example of naturalism in the religious art of the Hispanic Baroque. To create as life-like an impression as possible, often materials other than wood were used for such statues, such as glass for the eyes. For this statue of Ignatius commissioned by the Jesuit Order, the two artists used the saint's death mask to achieve the greatest possible likeness.