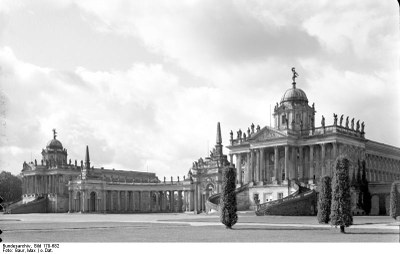 Under Frederick II, other palace besides Sanssouci were influenced by French models. The plans for the building of the Communs opposite the New Palace were drafted by the French architect Jean-Laurent Legeay. The New Palace was erected by the German Carl von Gontard, who had studied in Paris in the mid-18th century.

Max Baur (1898–1988), View over the Ehrenhof of the New Palace to the Communs, which are connected by a semi-circular colonade which is contained by two pavillions with an obelisk and has a triumph arch in the middle, black-and-white photograph [without year]; source: Deutsches Bundesarchiv (German Federal Archive), Bild 170–679, Wikimedia Commons, http://commons.wikimedia.org/wiki/File:Bundesarchiv_Bild_170-679,_Potsdam,_Sanssouci,_Communs.jpg.