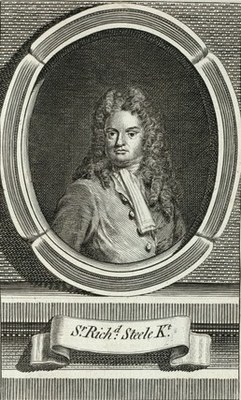 Richard Steele (1672–1729) was a well-known journalist of the Augustan Age. From his youth on he was bound to Joseph Addison by a deep friendship. After an infelicitous career in the army (1692–1705) he tried his hand as a playwright. His activity as a journalist began in the Whig newspaper The London Gazette. In 1709 he founded the prototype of the moral weeklies, The Tatler (1709–1711) and later The Spectator (1711–1714), on which his friend Addison closely collaborated. He shaped the journals' informal, lively style, whereas Addison contributed more polished texts. In 1714 he took charge of the renowned Drury Lane Theatre.