The Garden of Versailles Palace 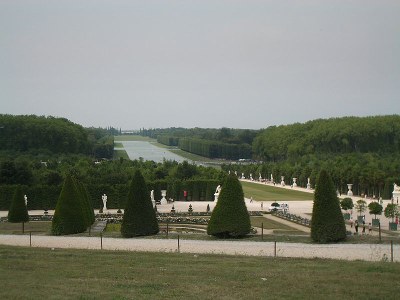 The garden of Versailles Palace was designed by the garden architect André Le Nôtre at the same time as the palace was being extended. The geometrical design of the garden, and the manicured trees, shrubs and hedges demonstrated the power of the ruler over nature.
This garden design corresponded to the idea – which was still dominant in the 17th century – that God created nature in a geometrical order. Paradise was the (ordered) Garden of Eden. Louis XIV saw himself as a representative of God on earth, and, therefore, his garden mirrored godly order.