The Propyläen on Königsplatz in Munich 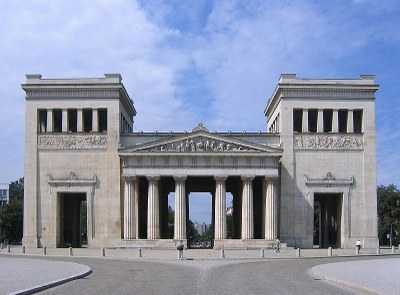 Due to the passionate philhellenism of Ludwig I, the king of Bavaria, the elevation of Athens to capital of the new Greek state and seat of residence of the monarchy was followed by the architectural regeneration of the city. Ludwig I sent his royal architect, the romantic classicist Leo von Klenze (1784–1864), to Athens. Thanks in large part to him, all post-antiquity elements were removed from the Acropolis and the restoration of the structures began. However, Bavarian philhellenism also had an effect on the appearance of Munich. The Propyläen, which are shown in the photograph, were built by Klenze between 1854 and 1862 in the west of Königsplatz, which was designed after the example of the Acropolis. However, it is not only a reminder of ancient Greece: the decorative features on the gable of the Propyläen depict scenes from the Greek struggle for independence, and plaques inside carry the names of people who fought for Greek independence.