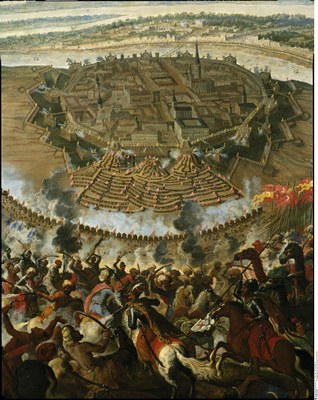 In 1683, an Ottoman army under the command of the Grand Vizier Kara Mustafa Paşa (1634/1635–1683) besieged the Habsburg capital of Vienna. However, the attackers suffered a devastating defeat at Kahlenberg against the relief army of Polish King John III Sobieski (1629–1696). The painting of the battle shows Vienna, which is strongly fortified with redoubts and bastions in the background, and, in the middle, the Ottoman siege ring with its trenches, from which tunnels were dug under the fortifications with the aim of collapsing them using mines. The foreground shows the battle between the Ottomans and the relief army.