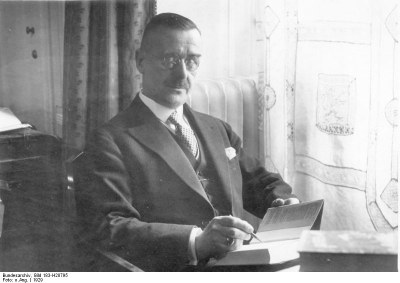 Thomas Mann is considered one of the most important German language writers of the 20th century. His breakthrough came with the publication of Buddenbrooks (1901), the novel of a family's history, for which he won the 1929 Nobel Prize for Literature. Among other novels, he published Der Zauberberg (1924), Joseph und seine Brüder (1933–1943) and Doktor Faustus (1947). He also published the important short novels (Tonio Kröger, 1903; Der Tod in Venedig, 1912). At first, Mann thought of himself as a national conservative citizen of the Wilhelminan Empire who, as such, did not take part in politics (Betrachtungen eines Unpolitischen, 1918). However, beginning in the 1920s, he actively supported the Weimar Republic's democracy and opposed the rise of National Socialism. At this time, he also joined the Pan-Europa Movement of Richard Coudenhove-Kalergi. In 1933 he went into exile in France, later in Switzerland and finally in America. In 1952, he took up residence in Switzerland again.