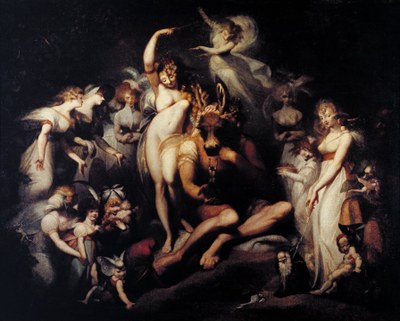 The Swiss painter Johann Heinrich Füssli (1741–1825) was very interested in William Shakespeare's (1564–1616) works and painted numerous scenes from his plays.  He particulraly enjoyed painting supernatural and irrational elements in plays such as The Tempest, Hamlet and King Lear.

This painting depicts the first scene from Act IV of the Midsummer Night's Dream, showing the queen of the fairies Titania and the craftsman Bottom who are both under the spell of the fairy king Oberon. In order to punish Titania for her pride, Oberon has made her fall in love with Bottom whose head he has transformed into that of a donkey. Titania murmurs lovingly to Bottom:

Come, sit thee down upon this flowery bed,
While I thy amiable cheeks do coy,
And stick musk roses in thy sleek smooth head,
And kiss thy fair large ears, my gentle joy.