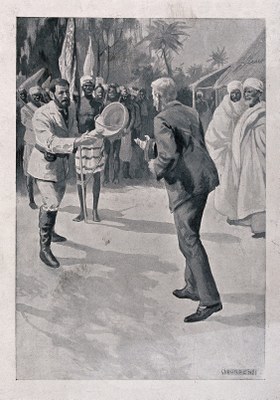 The picture shows the meeting of the Scottish missionary and explorer David Livingstone (1813–1873) and the British-American journalist and Africa researcher Henry Morton Stanley (1841–1904), who had tracked down Livingstone, lost since 1869, after a lengthy search in Ujiji on October 21, 1871. By that time, Livingstone was already a living legend as the discoverer of the Victoria Falls between today's Zimbabwe and Zambia and through his travels across the African continent. He continued his search for the source of the Nile together with Stanley and died in 1873 in the northeast of today's Zambia. Livingstone's body was transferred to England and buried in Westminster Abbey, while his heart, which had previously been removed, remained in Africa.