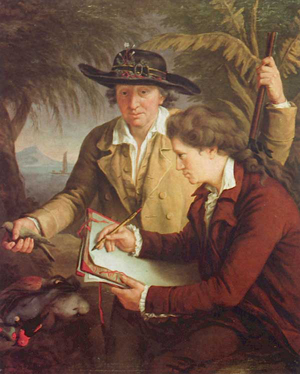 Johann Reinhold Forster (1729–1798) was the descendant of a Yorkshire landowner who had emigrated as a supporter of Charles I (1600–1649). He was born near Danzig and worked as a Protestant clergyman. In 1765, he undertook an extended journey to Russia with his son Georg. In 1766, he settled in England with his family, where Johann Reinhold Forster struggled to make ends meet as a translator, writer and teacher. Here, the father and son received the opportunity to accompany James Cook (1728–1779) on his second world voyage between 1772 and 1775 (A voyage round the world, 1777). In 1780, Johann Reinhold Forster became professor for natural history in Halle, where he remained until his death.

Georg Forster (1754–1794) was professor in Kassel from 1778, in Vilnius from 1784 and a librarian in Mainz from 1788, where he became the vice-president of the Rhine-German National Convention after the French conquest of the city in 1793. In 1790, he travelled through the Netherlands, Great Britain and France with Alexander von Humboldt (1769–1859) (Ansichten vom Niederrhein, von Brabant, Flandern, Holland, England und Frankreich, 3 parts, 1791–1794). The chronic penury of both Forsters forced them to moonlight as translators; they functioned, at times, like veritable "translation factories". They concentrated on translations of travelogues, which at that time were very popular, from English. Due to their various activities as naturalists, teachers, reviewers, correspondents, editors, travel writers and translators, they were both significant mediators between Great Britain and Germany, as well as between Europe and the rest of the world.