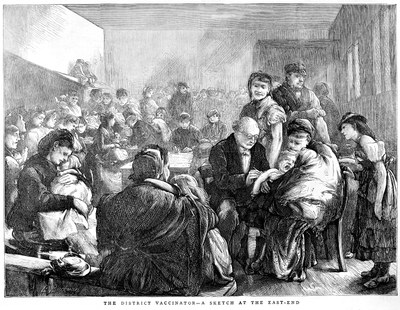 The woodcut from 1871 shows mothers with their children at a general vaccination in London's East End district. National vaccination programs were introduced after vaccines had been standardized from the end of the 19th century. Compulsory vaccinations against smallpox were administered beginning in 1867 in England and in 1874 in the German Reich.

A dispensary in the East End of London: crowds of local children are being vaccinated, woodcut, 1871, artist: E. Buckman; source: Wellcome Collection, attribution 4.0 International (CC BY 4.0).