Robert Koch in his laboratory in Kimberley 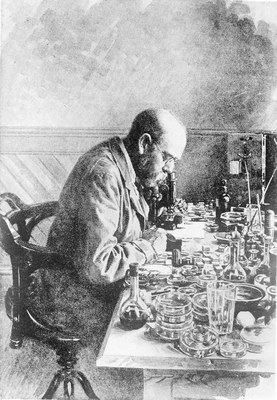 After the physician, microbiologist, and hygienist Robert Koch (1843–1910) succeeded in 1876 in cultivating the pathogen of anthrax (Bacillus anthracis) outside an organism and described its life cycle, it became possible to understand the role of bacteria in the development of a disease. Koch also discovered the tuberculosis pathogen (Mycobacterium tuberculosis) in 1882, but he was unable to find an effective cure. He is considered, along with Louis Pasteur (1822-1895), the founder of modern bacteriology and microbiology. In 1905, he was awarded the Nobel Prize for Physiology or Medicine. The picture shows Robert Koch in his laboratory in Kimberley, South Africa, where he studied a cattle disease in 1896 at the request of the British government.