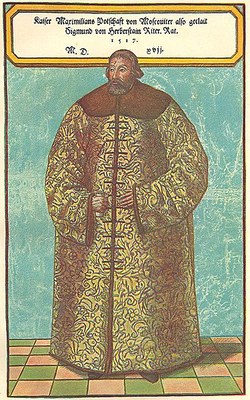 Sigismund von Herberstein (1486–1566) was an imperial counsellor in Vienna, and he also represented the Habsburg Empire as an envoy at the Russian court, and elsewhere. Herberstein recorded his impressions of Russia in a work entitled Rerum Moscoviticarum Commentarii which was first published in 1549 (an extended German-language edition was published under the title Moscovia der Hauptstat in Reissen in 1557), and which can be viewed as the basis of early Western European study of Russia. The drawing, which is from 1517, depicts Herberstein in Russian clothes.