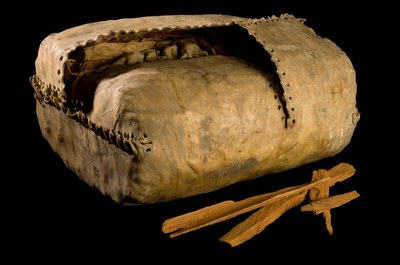 This bag, known in Peru as seron, was made in the 18th century. It was used in the 19th century to store and transport cinchona bark. Cinchona bark, whose active ingredient quinine had been used in South America for centuries as a remedy for fever and malaria, became a desired export good as European powers began to expand their influence in South America. This bag was acquired between 1777 and 1785 on behalf of Spanish king Charles III (1716–1788) during an expedition through Peru. Today it is in the possession of the Science Museum, London.