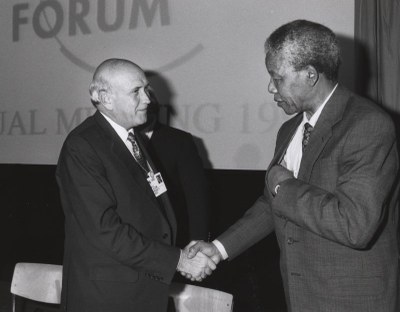 As the head of the South African government, Fredrik Willem de Klerk (1936–2021) campaigned for the ending of Apartheid. In 1990, he revoked the prohibition of the ANC (African National Congress) and had Nelson Mandela (1918–2013) and other political prisoners released from jail. After his election as president of the ANC, Mandela negotiated with the government on ways to dismantle the Apartheid system and create a new provisional constitution. Mandela and de Klerk met again at the Annual Meeting of the World Economic Forum in Davos in 1992 (photograph). In 1993, they were jointly awarded the Noble Prize for Peace. After the first free elections in South Africa in 1994, in which the ANC received a majority of the votes, Nelson Mandela became president; de Klerk acted as his vice president until 1996.