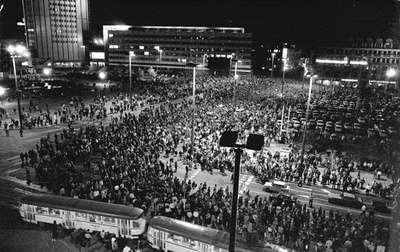 The photograph shows the Monday demonstration in Leipzig on October 16, 1989. At Karl-Marx-Platz (now Augustusplatz) 120,000 people gathered to demonstrate on behalf of a peaceful, democratic restructuring of the political conditions. The number of participants in the demonstrations steadily rose over the following weeks and was an important factor in the Peaceful Revolution in the GDR in the fall of 1989. Besides Leipzig, where the first smaller demonstrations had been taking place since 1988 after the prayers for peace in the Nikolaikirche, there were also mass protests in Dresden, Halle, Karl-Marx-Stadt, Magdeburg, Plauen, Arnstadt, Rostock, Potsdam, and Schwerin.