The London "Crystal Palace" in 1854: Masterpiece of iron and glass 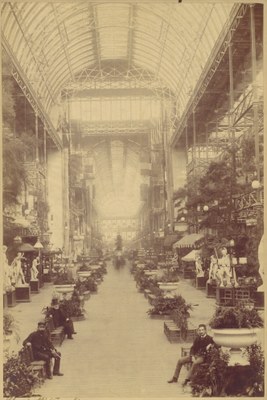 The Crystal Palace was erected in London's Hyde Park for the 1851 World's Fair, but was subsequently demolished and re-built in expanded form in 1854 in the south of the city. The "Crystal Palace" was the masterpiece of architect Sir Joseph Paxton (1803–1865), who had become famous by building greenhouses and gardens. The construction of cast iron and glass covered a total area of 93,000 m² and in places had a height of 39 metres, so that elm trees on site could find space under its roof. In 1936, the Crystal Palace burned down completely after an explosion.